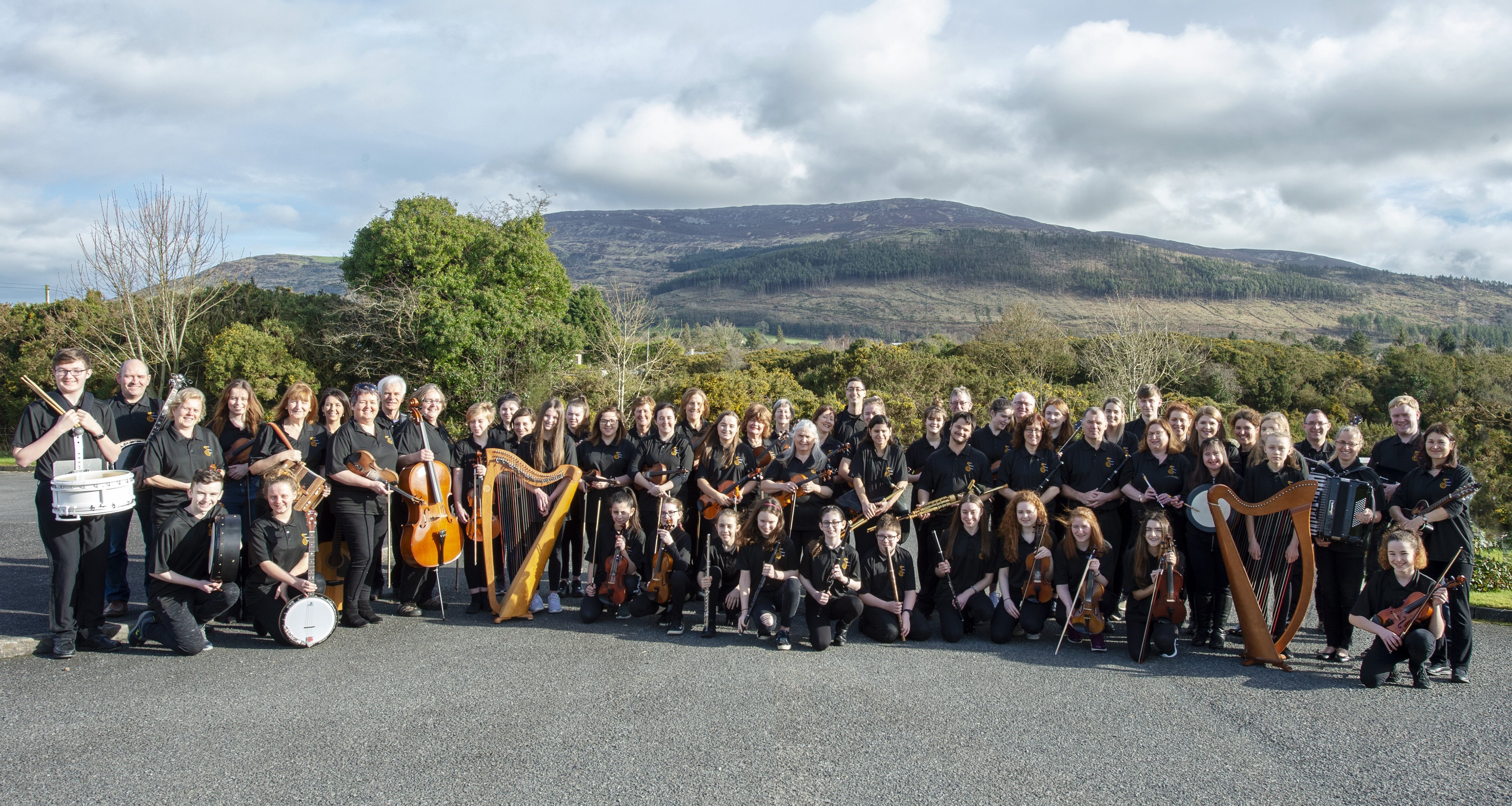 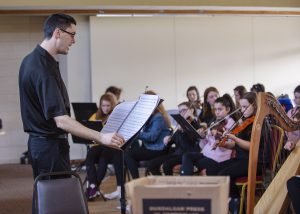 The Oriel Traditional Orchestra (OTO) will perform a special concert in Tí Chulainn, Mullagbawn, Co. Armagh on Saturday 27 April 2019 at 8pm. They will be joined on the night by a visiting group from Curso de Música Silva Monteiro from Porto and the concert will feature the premiere of a new work by Louth-based composer Daithí Kearney.

The Oriel Traditional Orchestra is a cross-border community orchestra whose members come from Louth, Meath, Monaghan and Armagh and focus on Irish traditional music repertoire from the region arranged especially for the orchestra. The orchestra is under the direction of Adèle Commins, Daithí Kearney, Noreen McManus and Róisín Ward-Morrow. Their repertoire includes music from Mullaghbawn fiddle player Josephine Keegan, Meath born harper-composer Turlough O’Carolan and Brian O’Kane from Ballybay, Co. Monaghan. The new suite, The Oriel March, was commissioned with the support of the Department of Culture, Heritage and the Gaeltacht.

The OTO performs repertoire from and inspired by the Oriel region with new compositions by members and local composers. To date, the repertoire has included music sourced to the Luke Donnellan collection, which formed part of Pádraigín Ní Uallacháin’s seminal study The Hidden Ulster (2003) and local fiddle player Gerry O’Connor’s MA dissertation at Dundalk Institute of Technology (2006), which was recently published as The Rose in the Gap (2018). The orchestra has also sought to include new compositions by its members and to date this has included a set from composers and directors Daithí Kearney and Adèle Commins from their album and collection A Louth Lilt (2017) and a new set from member Philip McGuinness. As the group develops, it is planned to include some songs from the rich Oriel tradition.

The Orchestra is led by fiddle teacher Noreen McManus who teaches with the Traditional Arts Partnership (TAP) in St Mary’s National School, Mullaghbawn, Co Armagh. TAP conduct classes in all instruments as well as teaching English and Irish Traditional singing. The students are encouraged to take part in the London College of Music (LCM) Traditional Music exams twice yearly and they regularly perform at various charity and community events while also having had great success at feisanna and Fleadhs since their inception nearly 10 years ago. They have also been regular performers at the Sitges Traditional Music Festival in Catalonia, Spain for the past 4 years and have been invited back yet again this October 2019. TAP musicians “Screelan” are excited to be asked to perform in Tí Chulainn in support of the Oriel Traditional Orchestra and look forward to contributing to a wonderful evening of music from the Oriel Region.

Dr Daithí Kearney is co-director of the Creative Arts Research Centre. Well-known as a performer, his most recent album with Tallanstown-native Dr Adèle Commins entitled A Louth Lilt (2016) featured new compositions in the traditional music idiom. Together they were also recently commissioned to compose music and song for a new production celebrating the history and heritage of East Cork by Youghal-based group Ceolta Sí. Kearney lectures on Irish traditional music and community music at DkIT and is director of the DkIT Ceol Oirghialla Traditional Music Ensemble, which has developed an international profile in recent years through performances in North and South America, Norway and Scotland.

Tí Chulainn in Mullaghbawn regularly hosts rehearsals for the orchestra who are delighted to perform in the centre, which sits in the shadow of Sliabh Gullion.  The orchestra are delighted to welcome their Portuguese friends who will participate in workshops while visiting Dundalk and surrounding areas.

Tickets for the concert are available from OTO members or at the door. To reserve a ticket email music@orieltrad.org

This website uses cookies to improve your experience while you navigate through the website. Out of these, the cookies that are categorized as necessary are stored on your browser as they are essential for the working of basic functionalities of the website. We also use third-party cookies that help us analyze and understand how you use this website. These cookies will be stored in your browser only with your consent. You also have the option to opt-out of these cookies. But opting out of some of these cookies may affect your browsing experience.
Necessary Always Enabled

Any cookies that may not be particularly necessary for the website to function and is used specifically to collect user personal data via analytics, ads, other embedded contents are termed as non-necessary cookies. It is mandatory to procure user consent prior to running these cookies on your website.