Ethnomusicologist Dr Daithi Kearney is co-director of the Creative Arts Research Centre at Dundalk Institute of Technology, lecturer in music and  Director of the Institute’s Traditional Music Ensemble. An All-Ireland champion musician, he has toured and recorded as a musician, singer and dancer with a number of groups including Siamsa Tíre, The National Folk Theatre of Ireland, and performed for President Obama in The White House. He recorded the critically acclaimed album Midleton Rare with accordion player John Cronin in 2012 and continues to tour regularly. Recent research includes a collection of the music of Monaghan composer Brian O’Kane. 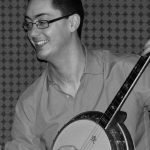 Musicologist Dr Adèle Commins, Head of Department of Creative Arts, Media and Music at Dundalk Institute of Technology. A graduate of NUI Maynooth with first class honours degrees in Music and Irish and Higher Diploma in Education, holds an ALCM and LGSMD in piano performance and is Musical Director of two local church choirs. Recordings include contributions to an album of Irish piano accordion music released by Comhaltas in 2014 and  vocal soloist on an album by Irish composer Sr Marie Dunne in 2015. Her recent research includes critically documenting the music of Co. Louth céilí bands from  the mid-twentieth century.

Both Commins and Kearney have published extensively on music including contributions to the Companion to Irish Traditional Music (ed. Vallely, 2012) and the Encyclopaedia of Music in Ireland (ed. White and Boydell, 2013). In 2017 they released an album A Louth Lilt, featuring their own compositions, and produced the documentary The Road to Speyfest in 2016. International tours including North and South America (2014), France, Canada and Scotland (2016), and Norway and England (2017). 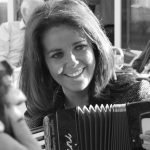 Noreen McManus has been actively involved in Traditional Music in the North East for over twenty years. She started fiddle under the tutelage of the legendary Martin Mulvihill, New York and at age 11, won the North American Championship in Solo, Duet, Trio and Ceili Band.

Noreen has travelled extensively, having played at Festivals and Irish Embassies in Africa, Saudi Arabia, Europe, United States and Scandanavia and also gave Presidential and Royal performances. As well as being a musician with various Folk and Traditional bands throughout the years, Noreen has also been sought after to teach Fiddle, Grupai Cheoil and Ceili Bands. Many of her students have had tremendous success at County, Provincial and National Level including being the musical director of All-Ireland u12 Grupa Cheoil Champions, CCE Dundalk at Fleadh Cheoil na hEireann, Derry 2013. The first All-Ireland title to ever be won by a County Louth group. Recently, she has taken on the position of Instrument (Fiddle) Tutor in DkIT.

Her dedication to the promotion of Traditional music in the area has led her to form “Cuchulainn Celtic Strings,” a community based music group that performs at various festivals, sessions, sporting and charity event. 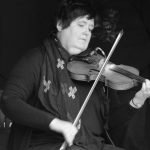 Roisin Ward Morrow is a graduate of the BMus (Hons) from DIT Conservatoire of Music and Drama where she studied both Irish traditional and classical violin. She has worked with leading conductors including Gearoid Grant, David Brophy, Eimear Noone and Greg Beardsell and has studied under the tuition of Noreen McManus and Zoe Conway. She has performed extensively in venues that include Dublin Castle, Dublin City Hall, the National Concert Hall and the RDS, as well as on RTÉ Radio One and Lyric FM. Internationally, she has performed as a member of the Cross Border Orchestra  since  2008 in the Royal Albert Hall, Avery Fisher Hall, Carnegie Hall, the Shanghai Oriental Arts Centre and the White House. She has established a private  school of music in Dundalk as well as teaching in the Cassidy Academy of Music in Sandyford, Dublin and for the Traditional Arts Partnership in Armagh. 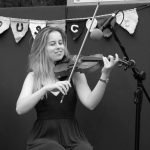